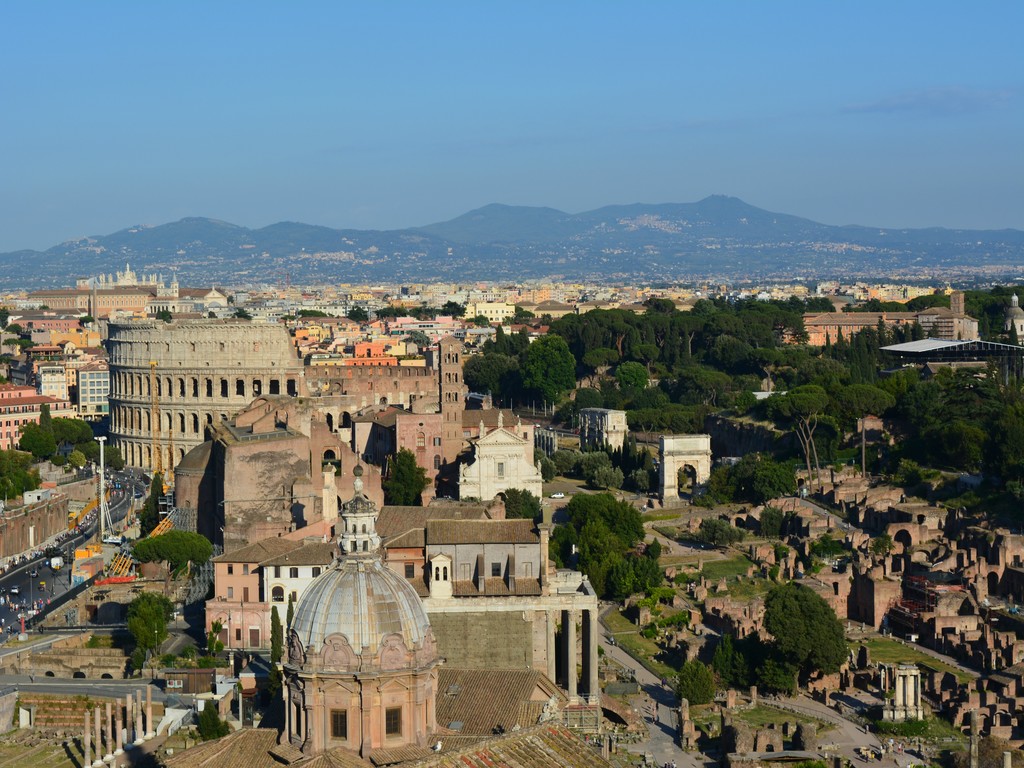 The Capital of the World, the crib of western civilization or simply “The Eternal City”. Rome may have many epithets but just the name of this amazing city is enough to make us shiver. Famous for its rich history that spans over 2000 years, as well as its architectural wonders, Rome is a city filled with magic where every street has something beautiful to look at. Here’s our guide of what to see in Rome!

WHAT TO SEE IN ROME 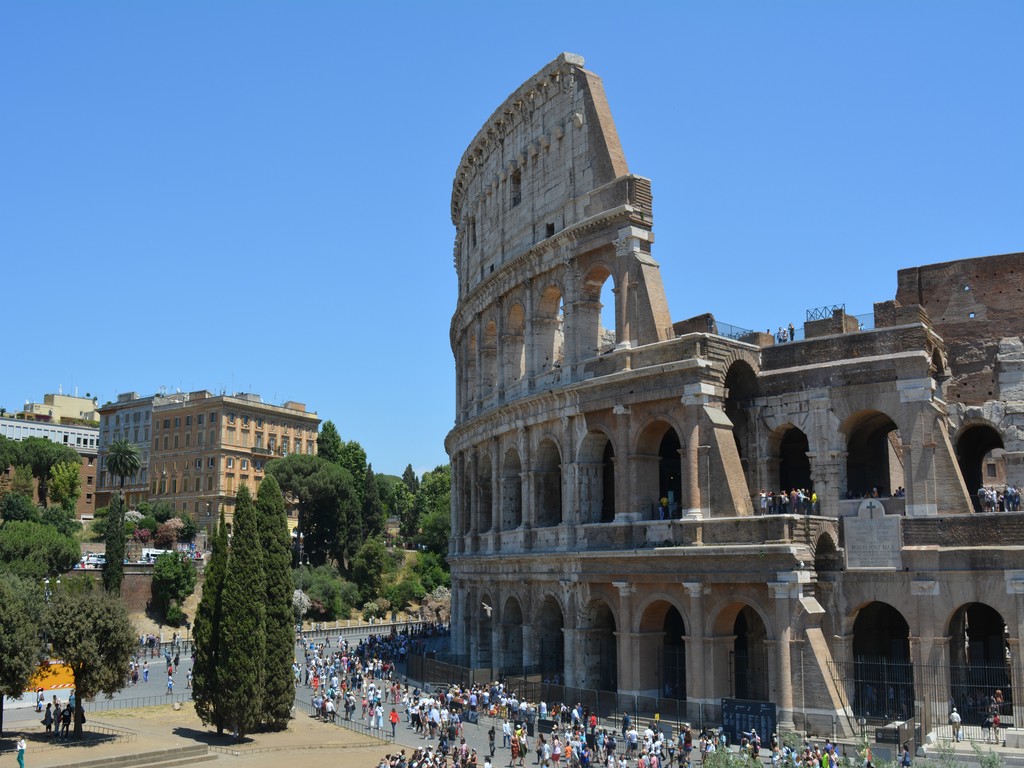 We’ll start with the ex-libris of Rome. Built between 70 and 79 AD, the Colosseum is the largest amphitheatre ever built. In its prime, it could hold a capacity of 80000 people who would flock to the arena to watch gladiatorial shows, recreations and executions. Having survived several earthquakes, nowadays this monument is one of the Seven Wonders of the World and is visited by over 4 million people every year. Having visited it, we can say the Colosseum left an indescribable impression of greatness when we first saw it, and this impact was so strong it actually left me in tears (yeah I’m not kidding…).

Tips: Arrive early! The place opens at 08:30 so get there at least 30 minutes before unless you want to spend your morning standing in a queue

How to get there: Metro B Line – Stop: Colosseo 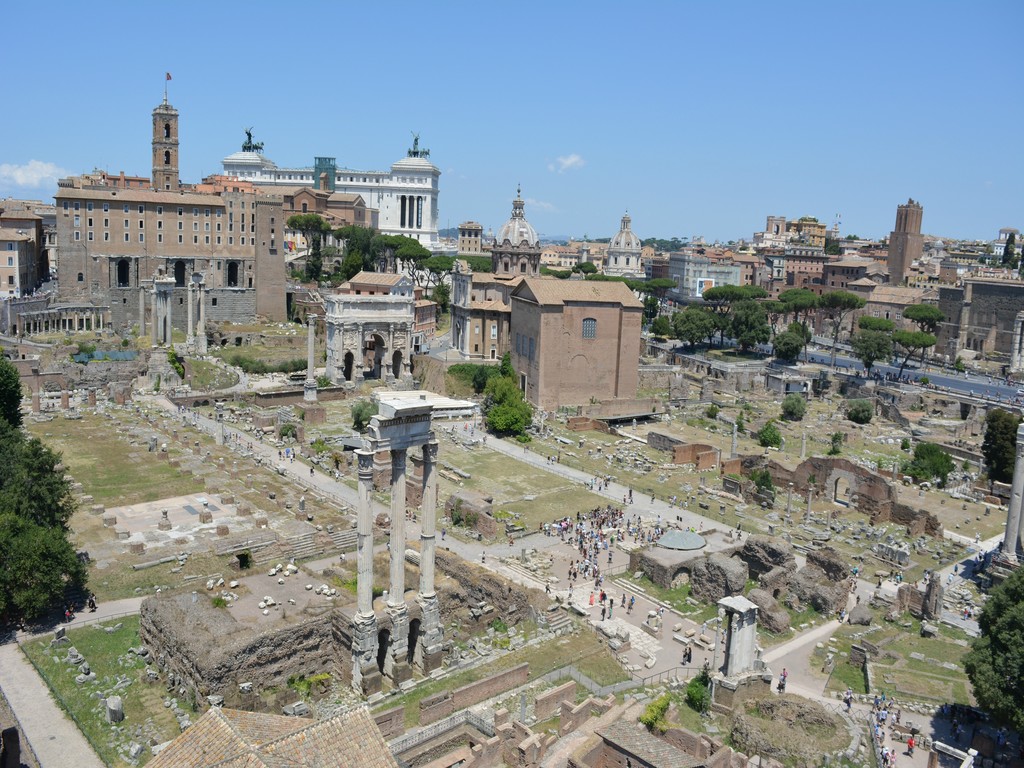 THE ROMAN FORUM AND PALATINE HILL

Along with the Colosseum, the Roman Forum and the Palatine Hill are the paradise of any self-respected history buff (“guilty” says Bruno). The Roman Forum is a complex, for the lack of a better word, brimming with ruins of the monuments and statues that were once part of ancient Rome’s architecture, while the Palatine Hill is said to be the place where the very first romans lived, containing numerous archaeological excavations. We believe this is the perfect complement to your colosseum visit since the ticket is valid for all three sites. In case you come from a family that doesn’t really place any value on history, such as Bruno’s, we advise you not to get to excited while showing the pictures of these places back at home. When we did it, his mother broke our hearts by stating that we went all our way to Rome to see, and we quote, “rocks falling”. After this reaction, one can only assume he was actually raised at a foster home. 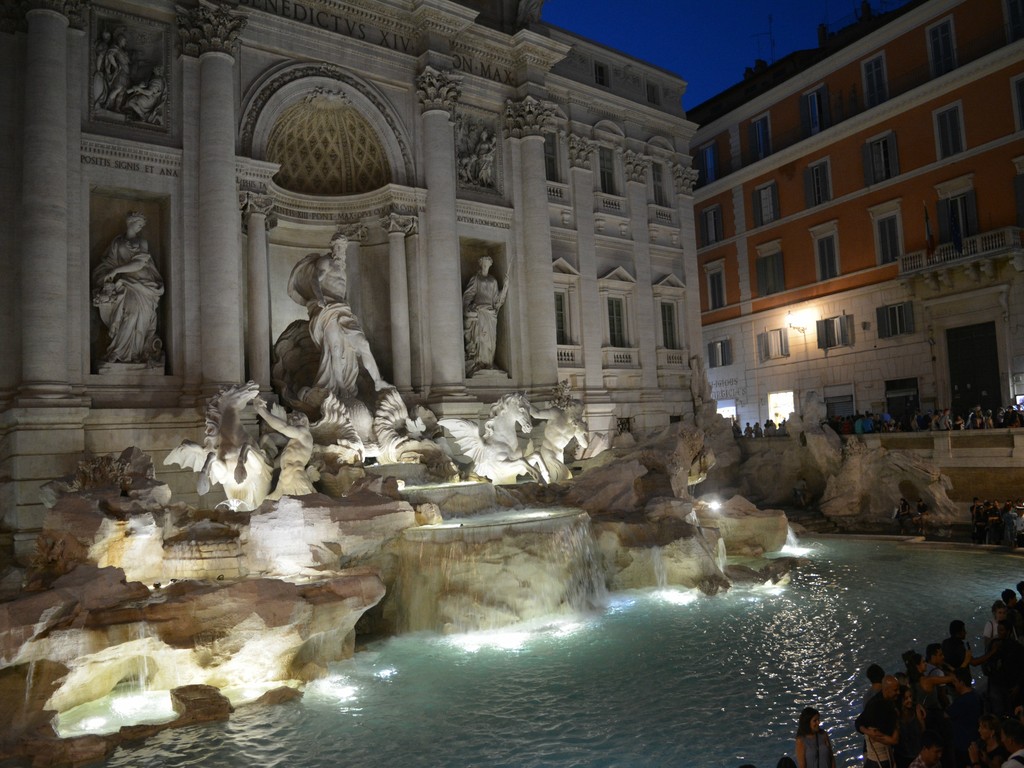 Dubbed by many as the most beautiful fountain in the world, no guide of what to see in Rome is complete without a visit to this outstanding baroque piece. Finished in 1762 (has been subjected to many renovations ever since), Fontana di Trevi is one of the most visited sights in Rome, and even though some people complain that the area is too touristy and filled with aggressive street vendors, seeing it is still a wonderful and refreshing experience. This fountain is also famous for a legend that says if someone throws a coin into it with his/her right hand over the left shoulder, then he/she will come back to Rome one day. Result: an estimated 3000€ are thrown into the fountain every day. This means your scuba diving equipment is a “must” on your list of items when you plan your next visit to Rome.

Tips: Visit at night. The fountain illumination, along with the sound of flowing water, makes for a magical atmosphere. Also, you better be firm while refusing the street vendors advances, otherwise you may find yourself at the end of the day with a bouquet of roses and 10 useless selfie sticks.

How to get there: Metro A Line – Stop: Spagna (from there you can walk to the fountain). 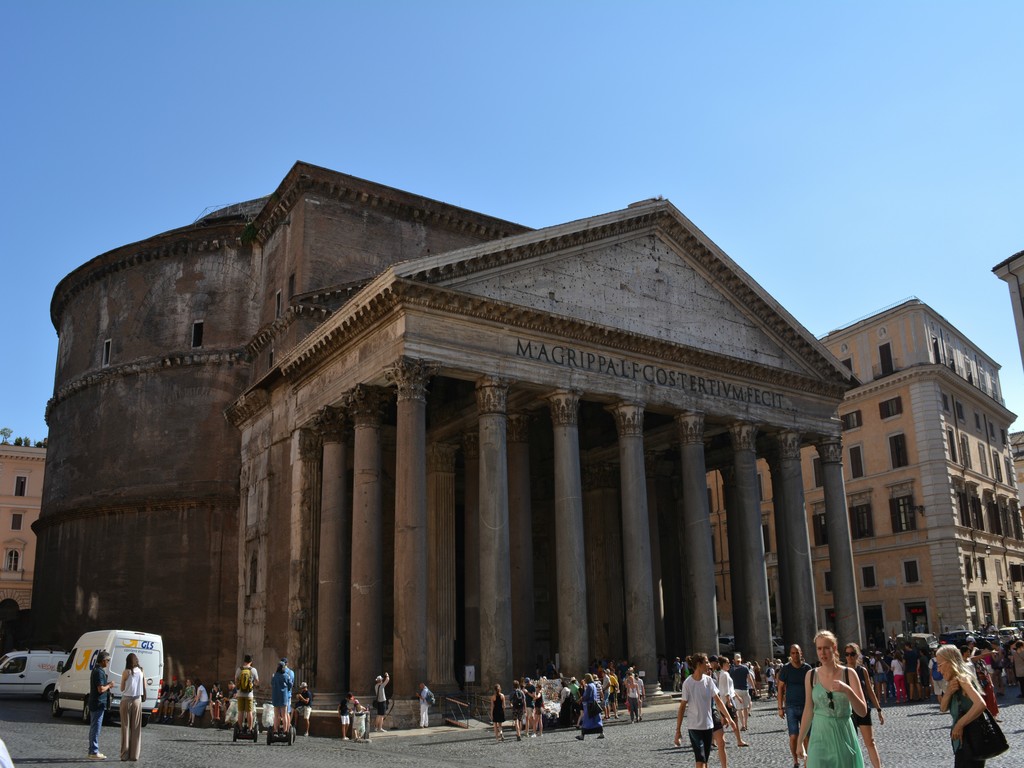 Just a 5-minute walk from Fontana di Trevi, visitors will find another of Rome’s most appreciated gems: The Pantheon. This imposing building was finished almost 2000 years ago and features what is still today the largest unreinforced concrete dome in the world, with a diameter of over 43 meters. Originally built as a temple to honour all gods, nowadays the Pantheon serves as a Catholic Church and resting place for some of Italy’s most renowned figures, such as Vittorio Emanuele II or the painter Raphael.

Tips: Pay attention to mass schedules. If you happen to visit while a mass is taking place, you may not be allowed in.

How to get there: The best way to get from one place to the other in ancient Rome’s streets is to simply walk. Why not create your own walking tour? It’s free, fun and absolutely stunning. 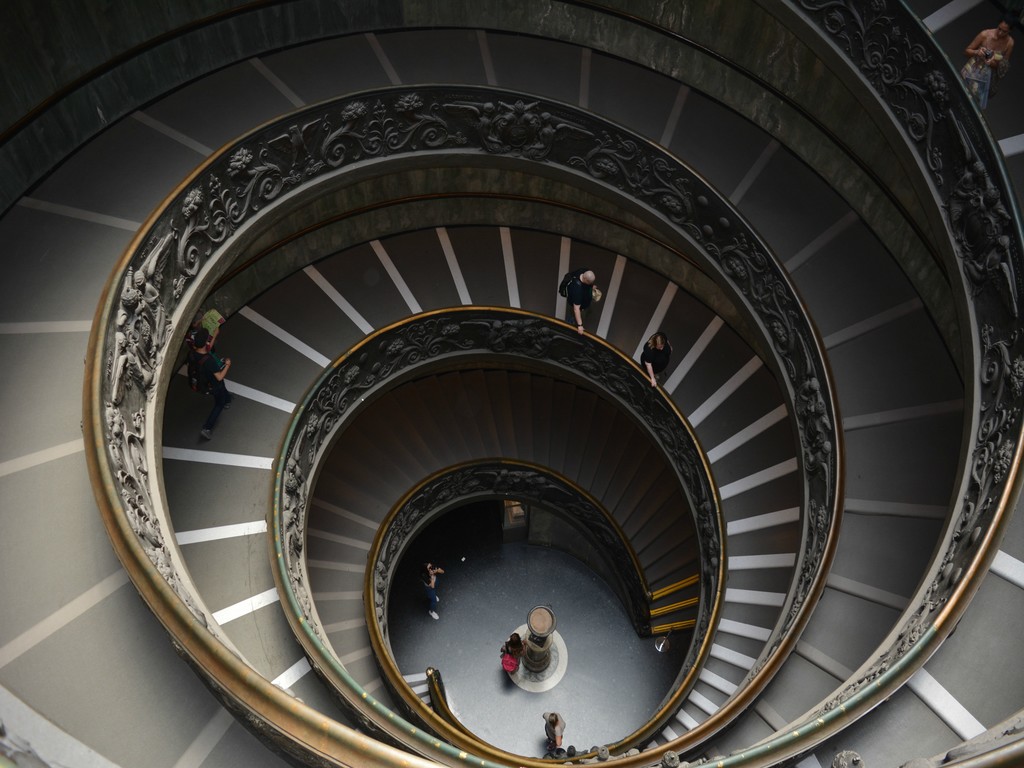 While we are perfectly aware that the Vatican is a sovereign state and not just a random neighbourhood in Rome, we still chose to include it on our list because of its historical and religious importance that draws millions of tourists every year. The first thing we recommend doing while you’re in Vatican City is to visit its fascinating museums. You will find a little bit of everything (from paintings and sculptures to sarcophagus and vases), from all over the world (Italy to Greece) and from any time in history (renaissance to ancient Egypt). And as if that was not enough, by the end of your visit you’ll be presented to the highlight of the entire museum: The Sistine Chapel.

Tips: Please listen to the museum workers and do not take pictures of the Sistine Chapel Ceiling. Not only is this an obnoxious move but you’ll also look like a complete idiot trying to hide the camera while snapping those pictures.

How to get there: Metro A Line – Stop: Ottaviano – S.Pietro-Musei Vaticani 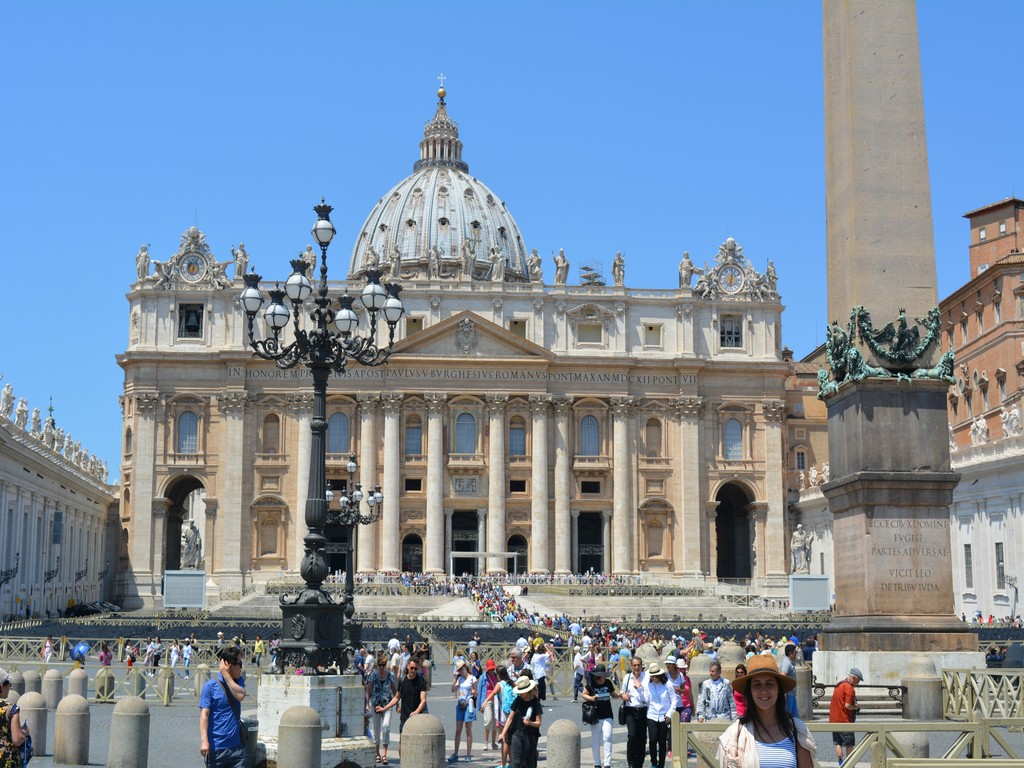 Although the Museums are indeed great, no visit to the Vatican is complete without setting eyes on its grandest attraction. Located in the beautiful (and crowded) Saint Peter Square, this stunning renaissance style church is said to be the burial place of one of Jesus apostles (Peter- you guessed it) and is nowadays one of the 4 papal basilicas, the highest title given to a Catholic Church. Luckily for visitors, all the other 3 are also located in Rome:

Tips: Arrive early and check the mass schedules before visiting.

How to get there: Very short walk from the Vatican Museums. 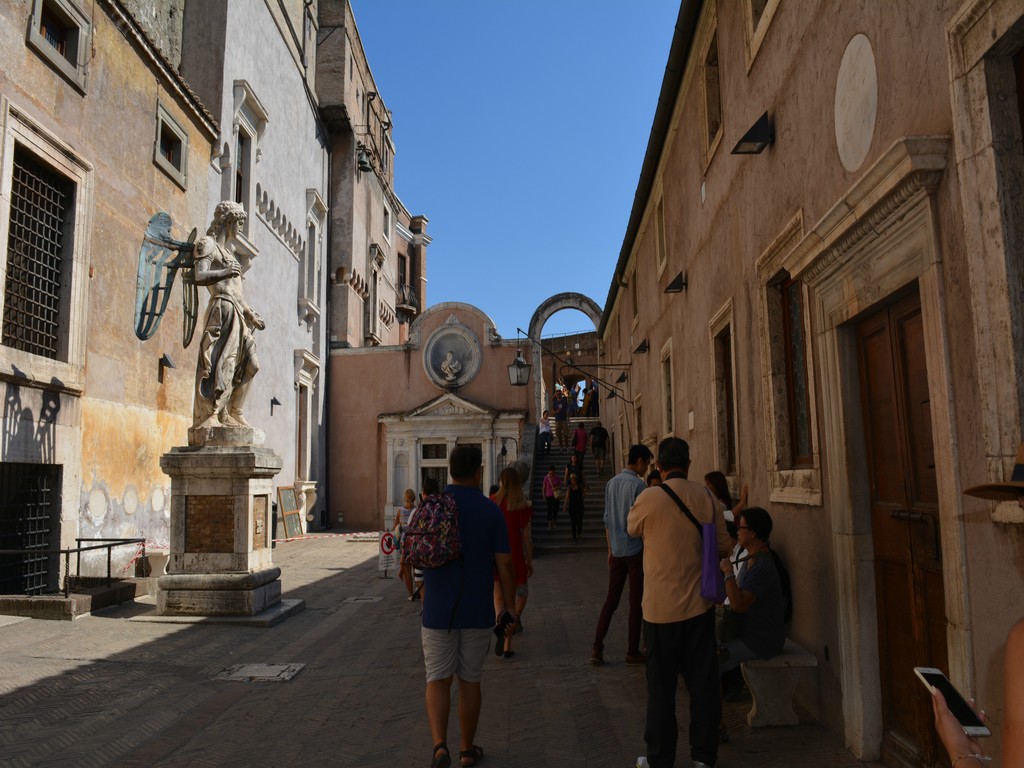 Leaving the Vatican behind and heading back to Rome, we recommend visiting the nearby Castel Sant’Angelo. This cylindrical structure was originally built as a mausoleum for Emperor Hadrian and his family, but has served different purposes ever since: from prison and fortress to Papal residence, this building is now a museum that documents the history of the castle throughout the centuries.

Tips: Get to the top. This was once Rome’s tallest structure, so the views are definitely worth it!

How to get there: Metro A Line – Stop: Lepanto 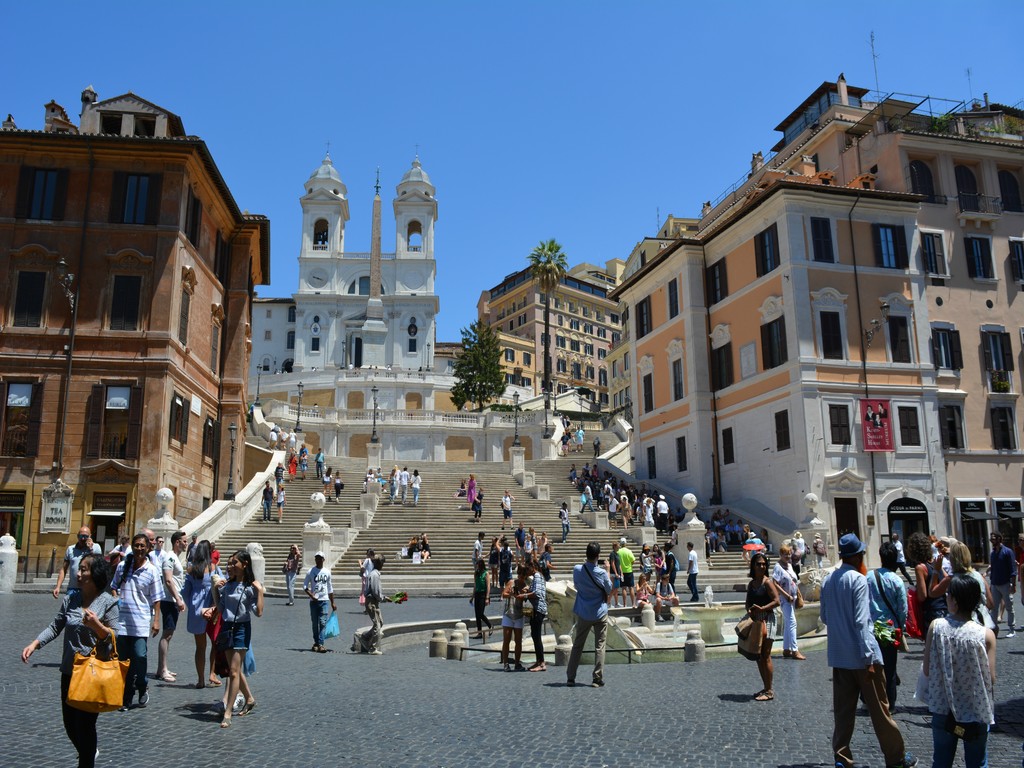 One of the most remarkable aspects of Rome it’s how much one can enjoy it by simply strolling through its streets. Part of this intrinsic charm is owed to the city’s magnificent squares, where visitors can feast their eyes on beautiful historic buildings, impressive obelisks and imposing churches, without having to spend any actual money. We strongly recommend visiting (at least!) the following: 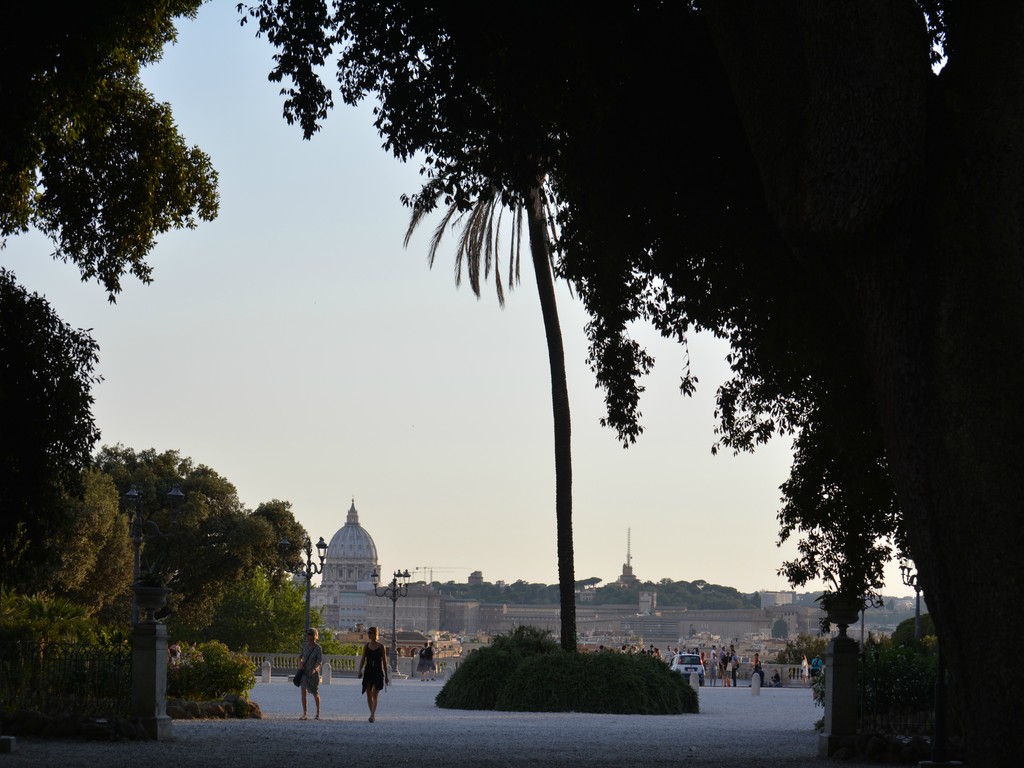 After spending a couple of days exploring the city, there’s nothing better than finding a park where you can enjoy a nice walk and do some sightseeing while eating a refreshing gelato. The best place to do this in Rome is no other than Villa Borghese, the third biggest public park in the city, but definitely the most beautiful. Its gardens are filled with stunning villas (ancient roman country houses) and other architectural gems, with the Galleria Borghese Art Gallery being the most famous attraction in the park. Whether you’re an art lover or not, Villa Borghese should be a must on your itinerary of what to see in Rome.

Tips: Despite being a public park, Villa Borghese is still a very touristy place. If you really want to find a green area where you can relax and escape the crowds, then you’ll be better off visiting Villa Ada.

How to get there: Metro A Line – Stop: Barberini; then bus 52 or 53 (or you can choose to have a lovely 20 minute walk from Barberini) 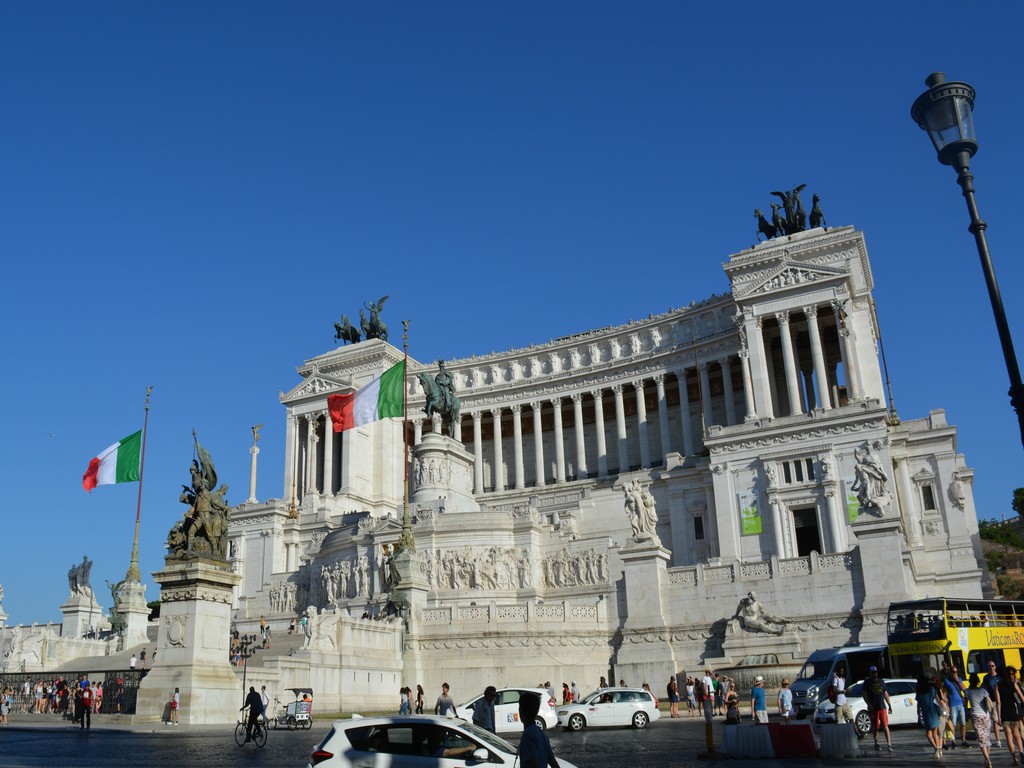 Also known as Altare della Patria, this monument was built (as the name suggests) in honour of Vittorio Emanuelle II, first king of unified Italy, and remains the most controversial attraction in Rome. In order for this behemoth of a tribute to be built, a medieval neighbourhood had to be destroyed back in 1885, causing the ire of many who also accused it of being too big and pompous. Despite all that, this building still managed to thrive throughout the years, and has become one of Rome’s most impressive and iconic landmarks.

Tips: Get to the top for one of the best panoramic views in the city. 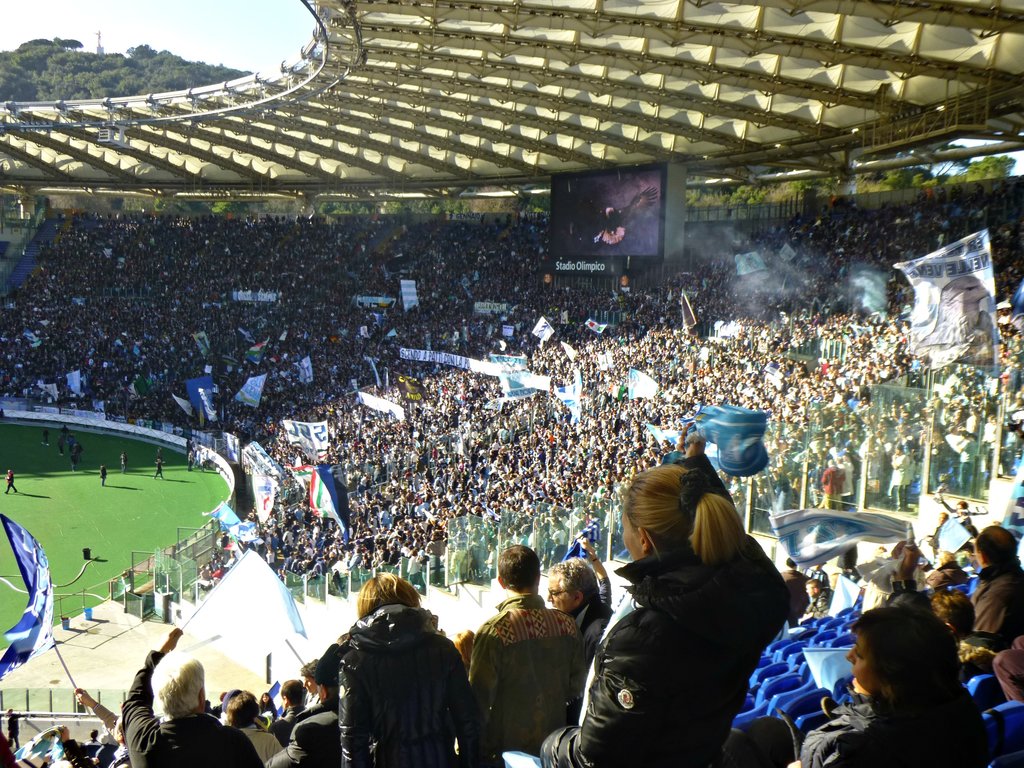 Now here’s one for footy lovers like Bruno. Located in the outskirts of the city, this 70.000 seater is the second biggest sports venue in Italy and was built for the 1960 Olympics. Since then, the stadium has hosted some major matches, including 4 Champion’s League Finals, 2 Euro Finals and 1 World Cup Final, which shows how important and reliable this venue is. Even though no tours of the ground are currently available, the stadium is shared by both AS Roma and SS Lazio so if you go during football season (between middle-August and May) you are guaranteed to have at least 1 match available.

Tips: The simplest and most basic advice for any sports attending fan – get there early!

How to Get There: Metro A Line – Stop: Ottaviano; then bus 32 (Direction Tor di Quinto) – Stop: Stadio Tennis

Being our very first destination, Rome will always have a special place in our hearts, so it makes perfect sense that our very first blog post is about this extraordinary city. What about you? What are your thoughts about the city? Would you add any other sight to our guide of what to see in Rome? Let us know on the comments below! 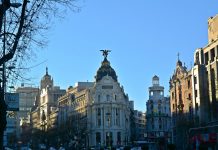 What to See in Madrid – An Essential Guide 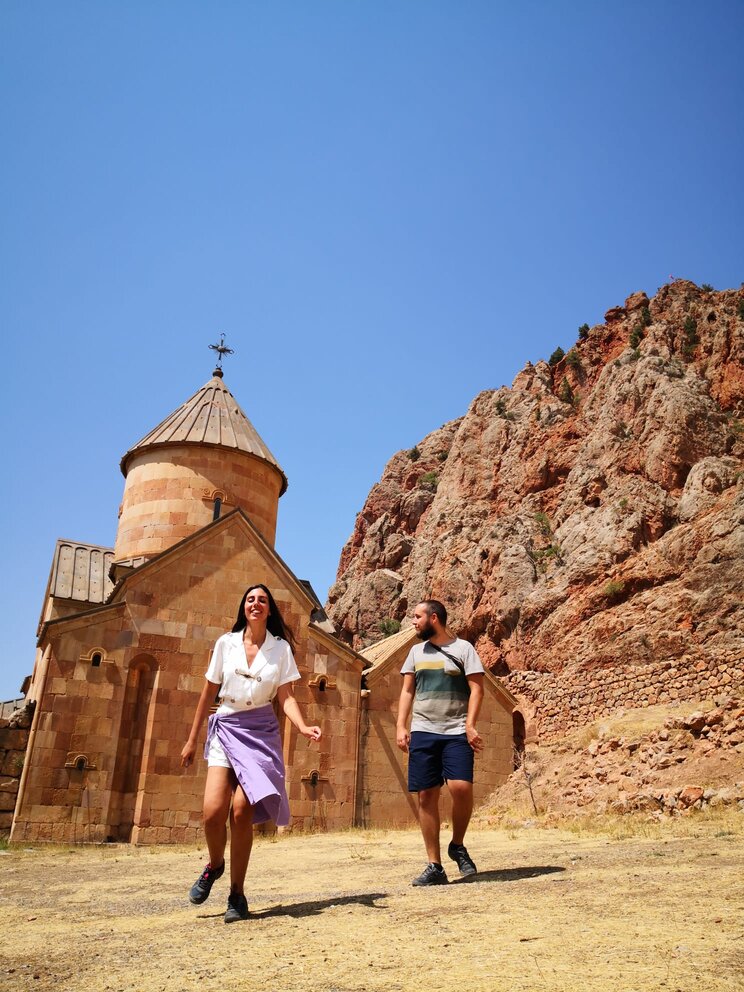